"As Europe, we are strong" 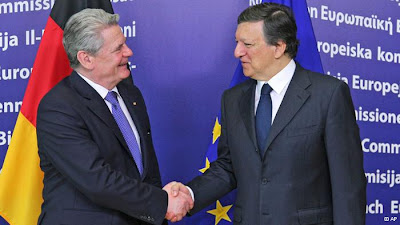 Popular support for the European Union is wavering amid its unrelenting economic crisis, German President Joachim Gauck warned in Brussels. He called for "more Europe," not less, in times of crisis.

"I am pleased that you've made your way to Brussels so soon after taking office," European Commission President Jose Manuel Barroso told his German guest at a joint news conference in Brussels Tuesday.

The Portuguese carefully uttered a few sentences in German: "You're sending an important, positive message about your commitment for Europe."

Both Gauck and Barroso were intent on exchanging more than just friendly words for the press. Gauck said he and the European Commission's chief compared notes on parallel developments in their personal lives, namely, growing up and living in a dictatorship. Barroso experienced the end of Portugal's military rule at the age of 18, and Gauck was a civil rights activist in communist East Germany.

The German president said their European convictions were shaped by these experiences.

"As young men, and for differing lengths of time, we shared the experience of knowing freedom only as a longing," Gauck recounted. "It was only much later that we were able to shape our freedom."

"The vision of Europe is closely bound to the practice of real political freedom," Gauck added.

Barroso cautioned Europeans to remember the European project, saying its accomplishments neither irreversible nor to be taken for granted.

“We need the commitment to the European project," he said, adding that Germany's president is in the right position to lead the way.

Don't be led by fear

The economic and financial crisis in Europe was also on the two presidents' agenda. "It's not only a crisis of finances, but also a crisis of trust," Gauck said.

Barroso warned of populism and social exclusion: "We need more Europe as a response to the crisis, not less," he said, pointing out a growing lack of confidence in the political and economic elite on the part of Europe's citizens.

Gauck said life in a dictatorship taught him "that fear narrows our eyes and tightens our hearts, - in difficult times, we shouldn't be led by fear or the temptation to go back, to leave the European project," he said. "As Europe, we are strong."

Gauck spoke as the head of a country - albeit the ceremonial head - that is at the center of expectations for aid in the current crisis. He said firm commitments make acts of solidarity easier for Germans - a reference to an EU stability treaty, the European fiscal compact that Germany lobbied hard for.

A vision of the future

Is the creation of a "United States of Europe" at the end of the road? Gauck said such a union would make sense.

"EU countries acting alone no longer have the reputation and the economic and political strength to be noticed in the large power center of this Earth," he added. "As Europe we're strong, but not as individual national states."

He went on with a smile to acknowledge that mentalities are slow to change and people in Europe are very fond of their national states.

A "United States of Europe" is a vision of the future that we're not ready for yet, Gauck said.