The CEOs of Deutsche Bank, Anshu Jain and Jürgen Fitschen, have said they will resign, confirming reports that surfaced on Sunday. The bank has been hit by a number of troubles in the recent past. 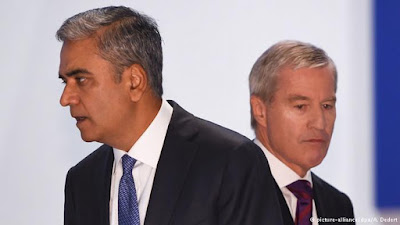 Jain will be stepping down on June 30, and Fitschen will stay with the bank until next year's main shareholders meeting in May, the bank said in a statement on Sunday. As of July 1, John Cryan, who has been on the Deutsche Bank supervisory board, will be co-CEO with Fitschen until he departs.

The Wall Street Journal, citing an insider, reported Sunday that Germany's largest bank would be announcing the change in leadership.

Last month, labor representatives at the bank's Frankfurt headquarters had called for Jain's resignation amid a revamp expected to slash jobs in a bid to pare down Deutsche Bank's retail and investment banking exposure.

Fitschen is on trial for fraud at a Munich court on allegations that he failed to correct false testimony given by his former colleagues in a court case linked to the collapse of German media mogul Leo Kirch's TV empire.

If found guilty, he could face up to 10 years in prison.

Deutsche Bank was also fined $55 million (49.5 million euros) by US regulators last month for misstating important financial data regarding its potential losses during the 2008 financial crisis.

In addition, the bank is facing several other legal battles. Allegations include charges that it manipulated currency markets, rigged the Libor and Euribor interest rates and did business with countries subject to US sanctions, such as Iran.