An Italian judge has ordered more than 140 people to stand trial over alleged ties to 'Ndrangheta mafia. The officials suspect ex-Juventus striker and national team member Vincenzo Iaquinta of intending to aid the clan. 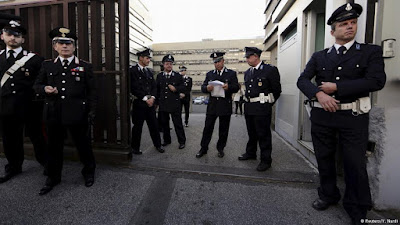 Iaquinta was indicted for illegal possession of firearms, aggravated by intention to help the Calabrian 'Ndrangheta organization, his lawyer Carlo Taormina said on Monday.

The 36-year old Iaquinta played for several Italian clubs, including the famous Juventus, and was part of Italy's national team which won the World Cup in 2006.

The Italian court ordered the Calabrian-born athlete and more than 140 other people to stand trial for their aiding or joining 'Ndrangheta, Italy's most powerful organized crime network.

A number of the suspects allegedly aided 'Ndrangheta to in their bid to infiltrate the country's north, where the influence of the mafia is traditionally weaker.


The Calabrian clan is rumored to control most of Europe's cocaine trade. Their name - 'Ndrangheta - comes from the Greek word for courage or loyalty, and prospective members are required to take an elaborate oath in order to join the organization.
Posted by Cempaka at 1:47 PM