Swiss politicians have passed a law to compensate former 'Verdingkinder.' Under the policy, which lasted until the early 1980s, officials took away children from poor families and forced them into hard physical labor. 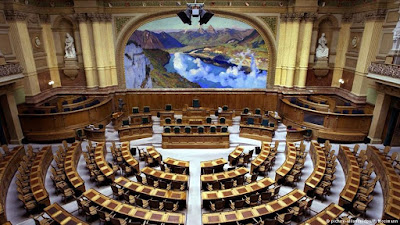 In an attempt to come to terms with one of the darkest chapters in Swiss history, the lower house of parliament has approved compensation for thousands of people who were separated from their families as children because the government considered their parents unfit to bring them up.

Nearly all members of the Nationalrat (pictured above) backed the project.

The bill was the result of an initiative started by entrepreneur Guido Fluri in 2014. "I'm proud of Switzerland," Fluri said in a statement broadcasted by Swiss channel SRF, adding that it was important to compensate the victims on time. Many were elderly and in very bad health, he added.

The law still needed to be approved by the upper house of parliament.

"Verdingkinder," which literally means "children for hire" in German, was a policy practised in Switzerland from the 19th century until the early 1980s. Officials forcefully took away orphans, illegitimate children, children of alcoholics and boys and girls whose parents had separated or who were from socially weak families. Many villages also organized auctions, where children were sold to the highest bidder.

The juveniles were then given over to farmers or owners of small factories and forced to do physical work. They often fell victim to sexual and physical abuse.

According to historians, the "Verdingkinder" policy affected thousands of people. In the 1930s alone, 30,000 children were placed in foster families across the country.

In 2012, Swiss filmmaker Markus Imboden depicted the suffering of the children in his film "Verdingbub" or the "contract boy." The film narrates the story of a woman, who hires children to work on her farm. Life on the farm is hard for the young boys and girls, who barely get enough to eat, were beaten and sexually abused.