MEPs have revoked the elderly far-right leader's immunity over anti-Semitic comments made in 2014. It is a move likely to be hailed by French prosecutors, who have sought to charge him with inciting racial hatred. 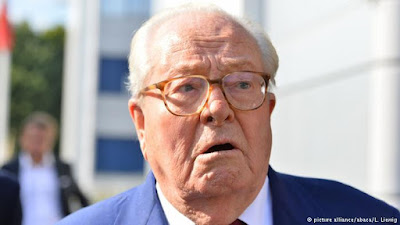 European lawmakers agreed on Tuesday to remove parliamentary immunity for France's far-right patriarch Jean-Marie Le Pen.  The decision has long been sought by French state prosecutors who want to see the founder of the National Front tried for inciting racial hatred.

The MEPs were able to gather the requisite number of votes after showing some footage from 2014 in which Le Pen slights Jewish singer Patrick Bruel and makes a pun alluding to gas chambers at Nazi concentration camps.

Le Pen has often been in the headlines over the past few years, not only for similar remarks downplaying the Holocaust, but also for his very public feud with daughter Marine, who now leads the populist party he created.

The legal affairs committee of the EU parliament said that immunity barring lawmakers from prosecution was not meant to "allow for slandering, libeling, inciting hatred or pronouncing statements attacking a person's honor."

According to French news agency AFP, parliament president Martin Schulz was moved to hand the complaint to the committee following complaints about Le Pen's Twitter account. He has been known to post disturbing images of crimes carried out by "Islamic State," such as the decapitation of American journalist James Foley.

Marine Le Pen, who has worked hard to try and recapture the headlines from her father's anti-Semitic views, called the video a "political error" and openly condemned the elder Le Pen for his statements. With an eye to the 2017 general election in France, Marine Le Pen has been hoping to position the National Front as a right-wing alternative to the conservative Republican party.