MONT PELERIN (Switzerland) (AFP) - A deal to unify Cyprus is within reach, UN chief Ban Ki-moon said Monday as he opened talks aimed at resolving one of the world's longest running political crises.

The Mediterranean resort island has been split since 1974, when Turkish troops occupied its northern third in response to an Athens-inspired coup seeking union with Greece.

The United Nations has launched several failed peace drives over the last four decades, but the latest bid between Greek Cypriot leader Nicos Anastasiades and his Turkish Cypriot counterpart Mustafa Akinci has been billed as the last best hope for an enduring truce.

During five days of negotiations at a luxury Swiss resort overlooking the Alps, the two leaders were set to directly discuss the thorny issue of territorial adjustments for the first time.

Ban applauded "significant progress" during the peace process that began 18 months ago, but cautioned that "sensitive and difficult issues still remain".

"The two leaders have reached a critical juncture in their talks. I encourage them to make the most of the moment and the momentum," he told reporters immediately before talks began.

"The prospect of a solution in Cyprus is within their reach."

The last major peace push collapsed in 2004 when a proposal worked out by then UN chief Kofi Annan was accepted by most Turkish Cypriots but resoundingly dismissed by Greek Cypriots in twin referendums. 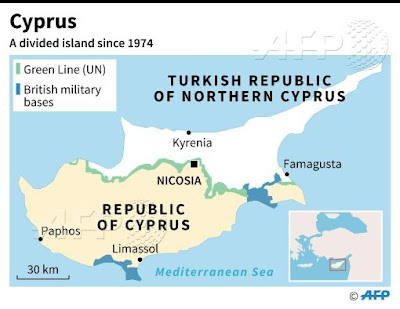 The rival leaders are trying to agree on the internal boundary dividing two prospective states. The future Greek Cypriot and Turkish Cypriot regions would be largely autonomous, but would exist under a unified Cyprus, with one head of state.

But any deal will require tough compromises on territory swaps, which could see a number of Turkish Cypriots displaced from their homes.

Anastasiades last week urged both sides to "seize the opportunity," calling for "progress on territory which allows us to lead to a final settlement".

Akinci, whose Turkish Republic of Northern Cyprus is only recognised by Ankara, also said that the push to solve the crisis cannot continue indefinitely.

"This is not something that we can keep discussing after 50 years for another 50 years. Everyone, including the UN, is aware of this," he said in a speech last week.

Ban has made clear he wants to see a final and enduring deal reached before he leaves office at the end of the year.

The orange-growing town of Morphou in the northwest of Cyprus represents the complexities surrounding territorial disputes.

Named Guzelyurt in Turkish, it is home to around 18,000 Turkish Cypriots, some of whom have lived there for more than four decades.

Greek Cypriots with ancestral ties to Morphou have said reclaiming control of the north coast town was crucial to any deal.

But some Turkish Cypriots in the town, many of whom are themselves refugees from other parts of the island, have declared relinquishing its control a non-starter.

The peace blueprint drawn up by UN mediators in 2003 called for Morphou to be handed over to Greek Cypriot administration.

Although Turkish Cypriot voters approved that plan, attitudes have hardened since.

Sinasi Ozdes, spokesman for a residents' campaign group, the Guzelyurt Civil Society Platform, told AFP he accepted there would have to be territorial concessions but would vote against any agreement that surrendered control of the town.

"We're going to give something -- but not Morphou," he said.

Anastasiades warned last month that there could be no deal without a full return of the area.

An agreement on disputed territory will almost certainly have to include a subsequent arrangement on refugee return and compensation for lost property, which cost billions of euros.

And any deal would again have to be approved by voters of both sides.

The island -- home to several British military bases -- is an EU member but its division remains a major hurdle in Turkey's accession bid.