Israeli Holocaust survivors and political leaders have expressed outrage over a Jerusalem demonstration at which ultra-Orthodox Jews donned Star of David patches and uniforms similar to those the Nazis forced Jews to wear during World War II.

Thousands of ultra-Orthodox Jews gathered on Saturday night to protest against what they say is a nationwide campaign directed against their lifestyle. for strict separation of the sexes, rejected by mainstream Israelis as religious coercion. Actions such as jeering at girls for dressing immodestly have unleashed a backlash against ultra-Orthodox Jews in general.

Ultra-Orthodox extremists have been under fire for their attempts to ban mixing of the sexes on buses, and other public spaces. In one city, extremists have jeered and spit at girls walking to school, saying they are dressed immodestly. These practices, albeit by a fringe sect, have unleashed a backlash against the ultra-Orthodox in general.

At Saturday's protest, children with traditional sidelocks wore the striped black-and-white uniforms associated with Nazi concentration camps. One child's hands were raised in surrender – mimicking an iconic photo of a terrified Jewish boy in the Warsaw ghetto.

Israel's Yad Vashem Holocaust memorial called the use of Nazi imagery "disgraceful," and several other survivors' groups and politicians condemned the acts.

Six million Jews were killed by German Nazis and their collaborators during World War II. About 200,000 aging survivors of the Holocaust live in Israel.

The American Gathering of Holocaust Survivors and their Descendants, an umbrella organisation of survivors, expressed its "utter contempt at this disgraceful exploitation" of the Nazi symbols.

"We who survived and witnessed these Nazi crimes are particularly offended that demonstrators so blithely used children in this public outrage. They have insulted the memory of all the Jewish victims, including those who were ultra-Orthodox," the organisation's vice president, Elan Steinberg, said in a statement.

Opposition leader Tzipi Livni called on the ultra-Orthodox leadership to condemn the display.

"This is a terrible offence against the memory of the Holocaust victims who were forced, secular and ultra-Orthodox alike, to wear the yellow star in the ghetto on their way to extermination, and there is no demonstration in the world that can justify this."

Some Israelis Question Benefits for Ultra-Religious 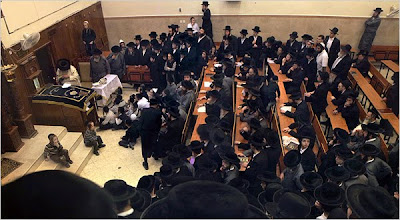 The ultra-Orthodox make up 10 percent of Israel’s population of 7.5 million,but are increasing rapidly amid a growing backlash to the privileges and subsidies long granted to the ultra-religious.
(Rina Castelnuovo for The New York Times)