British Prime Minister David Cameron is facing growing pressure at home and from the rest of the EU to do more in the face of the refugee crisis. Lars Bevanger reports from Manchester. 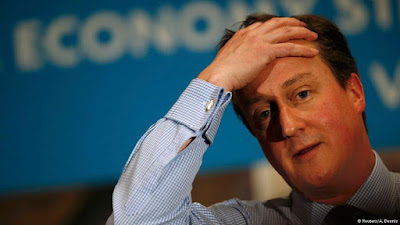 People in Britain woke up on Thursday to front pages carrying a harrowing image of a drowned Syrian boy washed up on a beach in Turkey. The gravity of the refugee crisis has suddenly become very clear for all to see, and the British government is now grappling with how to respond.

Prime Minister David Cameron told media on Wednesday that he did not feel taking more refugees was an answer for Britain. The British government has resisted proposals for an EU quota system for refugees, arguing Britain has already accepted almost 5,000 asylum applicants from Syria in the past four years.

That is still fewer refugees per capita than most other European countries have accepted.

Other EU countries, notably Germany, have been urging Britain to do more. The United Nations' special representative on international migration, Peter Sutherland, also said the UK was among those that could do more, noting that Germany, Sweden, France and Italy were all taking in more refugees per capita than the UK.

Now David Cameron is facing pressure from within his own Conservative party too. A number of backbench Members of Parliament (MPs) and more prominent senior Conservative politicians have openly called for the government to change its stance on refugees.

"I feel that the problems in Syria and North Africa require a full specter of response. One is providing a safe haven to those who are in a dire place and in desperate need," Conservative MP Johnny Mercer told DW on Thursday.

"I think we need to do our fair share within the collective European environment. I do not want people who have come across the Mediterranean, enduring some of the horrific scenes we've seen, to not think of Britain as a place of refuge. It has always protected people who can't look after themselves and I think we should play our fair role in that."

Another Conservative backbencher, David Burrowes, said the UK "should accept thousands, not hundreds" of people.

Former Conservative party chairperson Baroness Sayeeda Warsi weighed in on Thursday morning, saying the UK should be prepared to do more. She told media that Britain could "either say it's not our problem […] or say that we have a long and proud tradition of responding when these situations arise."

From threat to refugee crisis

In Britain over the summer the media has focused on migrants trying to enter the UK from Calais via the Channel tunnel.

Earlier this week Eurostar passengers were trapped for several hours while the train operator dealt with people walking along the rails. Most conservative media have portrayed the situation as a threat to British borders rather than a refugee crisis on an unprecedented scale in Europe.

British public opinion has long been divided on the issue of immigration, making it one of the top political issues in May's parliamentary elections. The current Conservative government was voted in promising to reduce immigration.

Harrowing pictures of drowned Syrian children and stories of desperate families being held back by armed police elsewhere in Europe could be turning public opinion though.

"Over the last four or five years, we've seen immigration rise to become the most pressing of voter issues. And yet the particularly traumatic pictures that we have seen over the last few days are clearly going to have an impact on public opinion," Andy Mycock, a political scientist at the Huddersfield University told DW.

"This is going to be the issue which more than likely is going to define Cameron's second term. And if he continues to misread foreign affairs as he does, you could see this in the same way as [Tony] Blair's prime ministerial career was utterly decimated by his mistakes in Iraq. It could happen to Cameron. His own party could turn on him," Mycock said.

Meanwhile, tens of thousands of people have been signing a parliamentary petition to push David Cameron's government into accepting more refugees. If more than 100,000 people sign, the government is required to consider the issue for debate in Parliament when it returns after its summer recess next week.