Britain's opposition Labour party has elected veteran left winger Jeremy Corbyn as its new leader. The one-time outsider succeeds Ed Miliband, who stepped down after the party's electoral defeat in May. 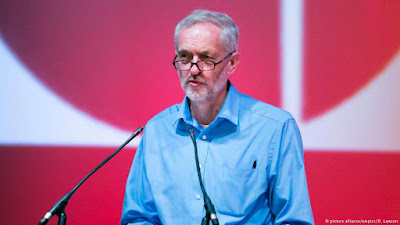 Avowed Socialist and anti-austerity advocate Jeremy Corbyn won 59.5 percent of the ballots cast, or 251, 417 votes, to take over the leadership position, the party announced at a special conference in London on Saturday.

Addressing the party after the result, Corbyn said he wanted Labour to strive for a diverse, "decent and better society" open to all.

Corbyn, who has often voted against past party decisions, scored during the leadership campaign on a message of promising to increase state-funded investments and re-nationalizing parts of Britain's economy, including railways.

Labour out of power?

Critics, including Blair, had argued that Corbyn's socialist ideas and aversion to Britain's membership of the Western military alliance NATO, would alienate moderate voters and keep Labour out of power.

Corbyn only entered the contest at a late stage, saying he wanted to ensure wider debate among candidates.

Saturday's result means that he will debate head-to-head in the House of Commons every week with conservative Prime Minister David Cameron.

Advocate for the poor

Corbyn grew up in a political family. His parents met as activists during the Spanish Civil War. He worked for trade unions before being elected to the Commons in 1983.

Corbyn, who has never held major office but instead remained a serial backbench rebel, opposed the now deeply unpopular 2003 US-led invasion of Iraq that was advocated by Blair while in office.

Corbyn also opposes Cameron's austerity measures which have seen deep cuts to welfare and has in the past said he believes "we can learn a great deal" from Karl Marx.

“…5 - Integrity That May Surprise…

The Unthinkable… Politics, A Review

Humans will begin to search for integrity and fairness and it's going to happen in the places you never expect. I said this last week, so this is a review. There'll come a time when you will demand this of your politics - fairness and integrity. So when the candidates start calling each other names, you will turn your back on them and they won't get any votes. They're going to get the point real fast, don't you think? How about that?

Let me give you another potential. This country that I sit in right now [USA] will set the mold for that particular attribute. I have no clock. Watch for the youngsters to set this in motion, and they will, for they are the voters of tomorrow and they do not want the energy of today. To some of them, it's so abominable they won't even register to vote in this energy. You're going to see this soon. That was number five.. ..."