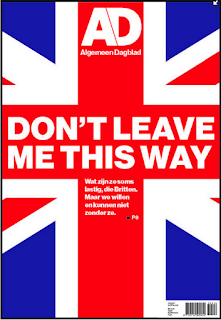 The Algemeen Dagblad on Wednesday devoted its entire front page to a plea to Britain not to leave the EU.

‘The British can be a right pain, but we don’t want to be and can’t do without them,’ the AD says in the centre of the British flag.

And in an open letter to Britain, the paper says that an EU without the UK would be like tea without milk – bitter.

‘This your neighbour calling. Please don’t leave us. Of course there will always be a Great Britain anchored only 20 miles from the continent. England, Scotland, Wales and Northern Ireland, we feel at ease in your amazing country.’

The paper goes on to point out that the Netherlands and Britain are related through the marriage of king William III and queen Mary and that the Dutch love British culture such as the Beatles, Bridget Jones and EastEnders. ‘Many of us know Monty Python’s dead parrot sketch by heart’, the paper goes on.

The call by The Sun to float off towards distant shores is not a good idea, the AD says.

‘We not only we love you, we need you. Who else supports us in keeping some common sense on this turbulent continent of ours?,’ the paper asks.

The AD takes its stand eight days before Britain votes in a referendum on whether or not to leave the EU. The voting is expected to be very close.

Initial reactions to the AD’s stunt have been mixed.

‘What a tearjerker from the AD. If the English want a Brexit, toodledoo,’ wrote Paul Blom on Twitter.

‘This would be a reason to cancel my subscription if I had one,’ wrote Invisible Power.