Germany's minimum wage is set to rise by four percent in 2017, up from 8.50 euros per hour to 8.84 euros, a special wage commission announced on Tuesday.

The politically independent commission - comprised of employers, workers and unions - agreed to raise the hourly wage by 34 cents, basing the calculation on a rate index provided by the Federal Statistics office.

The head of the commission, Jan Zilius, said the rise is in line with recent wage agreements in various sectors of the economy and that the decision had been unanimous. 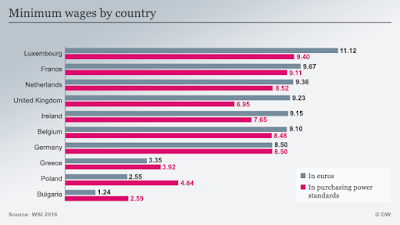 The tariff index incorporates some 500 collective agreements and found that over the past year and a half, wages and salaries had risen by an average of 3.2 percent. Consumer prices in Germany rose 0.1 percent year-on-year in May, following a 0.1 percent drop in April.

Unemployment in Germany has been at record lows, giving employers a stronger bargaining position in recent months.

This will be the first hike up for the minimum wage since it was introduced in January 2015. The wage level is revisited every two years.

The minimum wage applies to all adult workers, except for trainees or people with internships lasting fewer than three months.

The ruling will affect about four million low-paid workers in the German economy.