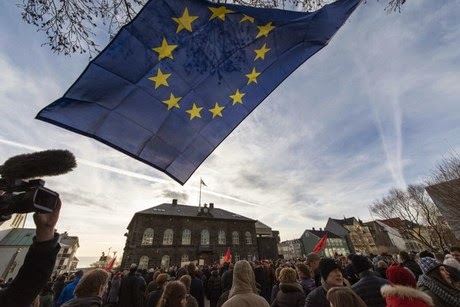 Iceland has postponed plans to withdraw its application for European Union membership, the government said Monday.

But pro-EU members of parliament have sought to block a motion giving the government the right to withdraw the application.

Foreign Affairs Minister Gunnar Bragi Sveinsson told newspaper Morgunbladid that the parliament would return to the issue after the summer recess.

“I did, in fact, expect the government parties to get the motion through. But there were bigger and more important matters we had to finish," he said towards to close of the parliamentary session.

"The government is not in any negotiations with the EU and does not intend to (be), so I only consider it a formality.”


Opinion polls suggest that a majority of Icelanders want a referendum to be held on EU membership, as initially promised by the governing Progressive Party and Independence Party.