Former Luxembourg Prime Minister Jean Claude Juncker has been confirmed as the new European Commission President by a comfortable majority. He said the 28-member bloc would not take in new members in the near future. 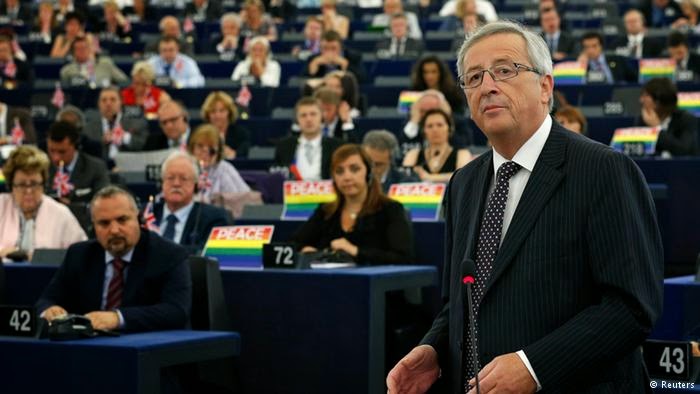 In a vote at the European Parliament in Strasbourg on Tuesday, 422 out of 751 lawmakers supported Juncker’s appointment as the president of the European Commission, the EU's executive body. Two-hundred-and-fifty parliamentarians opposed the appointment.

Addressing the MEPs prior to Tuesday's vote, Juncker said that the EU would freeze expansion for the next five years. "The EU needs to mark a pause in its enlargement process so that we can consolidate what has been done with 28 [existing member states]," he said.

Juncker announced plans for a "reindustrialization of Europe," calling for a 300 billion euro ($409 billion) investment plan which would "enhance growth and competitiveness." He also called for more solidarity with the EU’s southern states facing the pressure of tackling migrants who reach their shores.

Chancellor Angela Merkel later congratulated Juncker for his finalized appointment, specifically praising that he cleared the first parliamentachieved at the first vote.

"This is a good sign for Europe's capacity for action," Merkel said. "And this will assist us in quickly getting to work with the new commission."

Juncker was previously in charge of the "Eurogroup," a collection of finance ministers from the countries using the single European currency, the euro. In this role, he gained fans and critics alike after recommending sometimes drastic cuts in public spending for eurozone governments struggling with debts in the aftermath of the 2008 recession.

His center-right alliance in the European Parliament, the European People’s Party (EPP), won the most seats in elections held this May. The second-placed center-left alliance later threw its support behind Juncker, who said on Tuesday he would seek to form a "grand coalition" - akin to Germany's - in Strasbourg. Yet his appointment was strongly opposed by British Prime Minister David Cameron, who demanded a more reform-oriented leader as the commission’s head.

Socialist and liberal factions in the EU Parliament extended their support to Juncker shortly before voting took place. Socialist leader Gianni Pitella said, “We are holding out a hand to you of confidence. It is now up to you not to betray that trust.”