Space probe Rosetta has reached position near a deep-space comet that scientists hope holds clues about the solar system's origins. The much-anticipated rendezvous comes at the end of a decade-long journey. 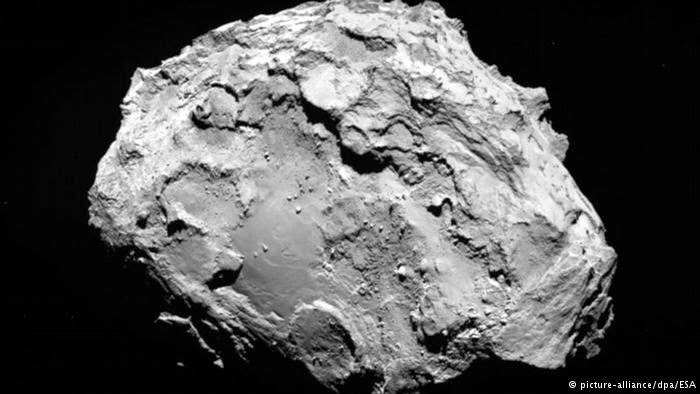 The orbital entry on Wednesday was triggered by a firing of thrusters to bring the craft into the first of a series of "pyramidal" paths around the comet's nucleus, which has been likened to a rubber duck because of its odd shape.

ESA's Twitter account for the mission tweeted a photo of the comet's nucleus, along with a succession of greetings in different European languages.

The arrival marked a key moment for the 1.3-billion-euro ($1.76-billion) project examining the formation of the solar system. If all goes according to plan, Rosetta will carry out its first landing on the comet in November, sending a robot chemistry laboratory named Philae to the comet's surface.

Rosetta took off from Earth aboard an Ariane 5 rocket on March 2, 2004, from ESA's launchpad in French Guiana. The space agency has likened its unprecedented journey to a game of "cosmic billiards."

To reach its present position, the craft had to make four flybys of Earth and Mars, using the gravitational force of each as a slingshot. Rosetta then entered a 31-month hibernation period as the sun became too weak for its solar panels, coming back to life in January this year.

The latest maneuvers, to bring the probe within about 100 kilometers (60 miles) of the comet, have involved the craft making a series of braking maneuvers. The probe will eventually be steered into position some 10 kilometers from the nucleus' surface.

Astrophysicists believe comets, icy clusters left over from the formation of the planets 4.6 billion years ago, could be the key to understanding how the planets coalesced and formed around the sun. It is also thought they might harbor clues as to the source of the water that formed the Earth's oceans, as well as the origins of life itself.