For the first time in over 90 years, Turkey has permitted the construction of a new Christian church. Since the end of the Ottoman empire in 1923, only renovations of existing churches had been allowed.

At a meeting of religious representatives in Istanbul on Friday evening, Turkish Prime Minister Ahmet Davutoglu said the Syriac Christian church will be built on state-owned land in the Istanbul district of Yesilkoy, which already has Greek Orthodox, Armenian and Catholic churches. The construction work, however, will be paid for by the Syriac group.

There are currently approximately 100,000 Christians in Turkey, which has an almost exclusively Muslim population of 80 million.

Although Christians and other religious minorities are allowed to practice their religion in Turkey, they continue to face restrictions.

The Orthodox Church, for example, is forbidden from training its priests, and foreign clerics find it difficult to obtain work permits.

The Alevi sect of Islam has also come up against restrictions in its fight to have its places of worship, known as cemevi, recognized as equivalent to mosques. 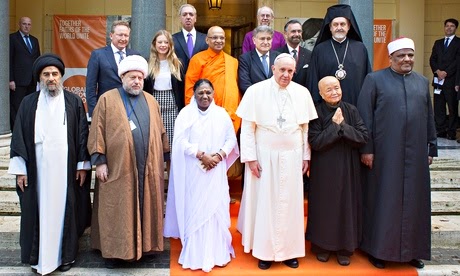 Pope Francis and other religious leaders at the Vatican. Photograph: AP

Look for a softening of finger pointing and an awakening of new tolerance. There will remain many systems for different cultures, as traditions and history are important to sustaining the integrity of culture. So there are many in the Middle East who would follow the prophet and they will continue, but with an increase of awareness. It will be the increase of awareness of what the prophet really wanted all along - unity and tolerance. The angel in the cave instructed him to "unify the tribes and give them the God of Israel." You're going to start seeing a softening of intolerance and the beginning of a new way of being.

Eventually, this will create an acknowledgement that says, "You may not believe the way we believe, but we honor you and your God. We honor our prophet and we will love you according to his teachings. We don't have to agree in order to love." How would you like that? The earth is not going to turn into one belief system. It never will, for Humans don't do that. There must be variety, and there must be the beauty of cultural differences. But the systems will slowly update themselves with increased awareness of the truth of a new kind of balance. So that's the first thing. Watch for these changes, dear ones. ...."