Merkel and Hollande in last-ditch diplomatic effort in Russia 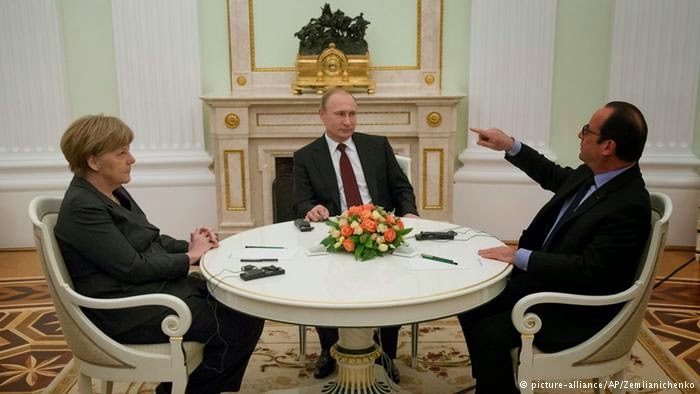 France's Francois Hollande and Germany's Angela Merkel left Moscow after several hours of talks with Russian President Vladimir Putin without reaching an agreement to resolve the crisis in Ukraine. There were no photo-ops with handshakes or smiles, no press conference, only three tense faces around a small table in an ornate room in the Kremlin.

The last-minute dash to Moscow is the first for Merkel since the start of the Ukraine crisis while Hollande made a brief stopover in December. The European duo hoped to curb the rising tide of violence in eastern Ukraine between government forces and pro-Russian separatists, but no one was particularly optimistic about the outcome of the meeting.

The French president said he and Merkel would present "a new proposal for a comprehensive settlement based on the territorial integrity of Ukraine," to Putin and denied rumors that the plan actually came from the Kremlin.

Speaking in Berlin before her own flight to Moscow, Chancellor Merkel said she was "convinced that there is no military solution to this conflict," but took a realistic view of her Russian trip, saying no one could be sure they would "manage to achieve a truce through these talks."

An official speaking anonymously to Reuters news agency said that it is unlikely Putin would make any concession, as he "does not appear to have any incentive to back down now" while the separatists are gaining ground.

Top NATO commander Philip Breedlove also warned on Friday that any ceasefire must be monitored by a group like the Organization for Security and Cooperation in Europe (OSCE), because the last truce agreed upon in Minsk in September was used by the separatists to regroup and rearm.

Ukraine at the top of the agenda in Munich

The situation in Ukraine also took highest priority at an international security conference in Munich, where the debate over whether or not to arm Ukraine showed cracks between the EU countries, who flatly rejected such an idea, and the United States, which appears to be considering it.

In her opening speech at an international security conference in Munich, Merkel's defense minister, Ursula von der Leyen, warned that arming Ukraine - something Ukrainian officials have repeatedly asked for - could backfire.

"The support with arms from Russia to the separatists is potentially unlimited. And do we really count on being able to provide as many arms to the Ukrainian army that they could potentially conquer the other side?" von der Leyen asked the conference.

The Franco-German peace effort is an attempt to reestablish a truce to a conflict that has killed more than 5,000 people before European leaders met next week to discuss imposing new economic sanctions on Russia. 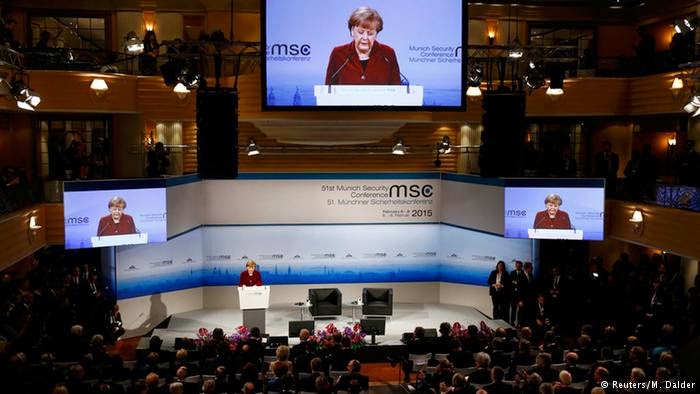