Lobbyists from the farming and newspaper sectors worked hard to win exceptions to Germany's minimum wage, it has been revealed. But the employers' representatives don't think it did them much good.

Germany is seven months into its new minimum wage, but not everyone is happy. The government has now admitted that lobbyists from a number of different sectors had urged it add exceptions to the new rule that no one in the country should earn less than 8.50 euros ($9.40) an hour.

The information, shown to DW on Thursday, emerged thanks to an official parliamentary request by the German Left party. Particularly persistent were representatives of the farmers' and newspaper publishers' associations, who met government representatives a total of 15 times in the months leading up to the law being passed in parliament.

"The economic lobbyists have made sure that entire sectors have been left behind by the minimum wage," Left party parliamentarian Michael Schlecht said in an emailed statement. "Particularly the lobbyists of the publishers' and the farmers' associations clearly felt a lot more need to speak to the government during the lawmaking process."

"The result is well known," he added. "Hundreds of thousands of people did not benefit from the introduction of the minimum wage at the start of the year."

But the German Farmers' Association (BDV) don't think they gained much advantage. "We were invited to hearings, like every interest group, and we think it's legitimate to describe what happens in practice, in business," BDV spokesman Michael Lohse told DW.

The farmers also argued that the minimum wage will have a real impact on their business when it comes into full effect for temporary workers during the 2017 harvest.

"We analyzed that and communicated it - we will have to lose some production abroad," Lohse said. "In Romania and Bulgaria they have a minimum wage of one or two euros. Go shopping with your eyes open one day - there's half a kilogram of cherries for 7.50 euros from Brandenburg, and you have two kids who like to eat cherries, and you decide if you want cherries for 7.50 euros, or you buy the ones from Bulgaria for 3.50 euros. Then of course the retailer turns round and tells the farmer I can't buy your cherries anymore. Then production goes abroad and it will cost jobs - that's all we said. And that's legitimate."

Another complaint against the minimum wage was the amount of bureaucracy involved. At the end of June, Labor Minister Andrea Nahles, who drove the new minimum wage legislation, bowed to pressure and eased the regulations forcing employers in certain sectors to record how many hours their lowest paid workers were working.

Up until then, the new minimum wage law stipulated that employers in the construction and gastronomy sectors, and others considered to be particularly susceptible to off-the-books work, had to document the number of hours logged by anyone earning less that 2,958 euros a month. That cap has now been lowered to 2,000 euros a month.

But Lohse was not happy with the whole new system. "If you have 100 or 200 people on a field and one of them has to leave, you have to write that down," he complained. "If they go home to have lunch, you have to document that - if it rains, or there's a storm. There are special conditions during the harvest time and these documentation obligations all take a heavy toll."

The conservative sections of the government coalition - both Angela Merkel's Christian Democratic Union and its Bavarian sister party the Christian Social Union - have been pressing for corrections to the law.


But Nahles' Social Democratic Party can also point to considerable successes - in May it could announce that 3.7 million people in Germany had received a pay raise as a result of the minimum wage, and that dependence on social benefits had declined. Also, fears that the new law would lead to a sharp rise in unemployment figures have so far proved untrue. 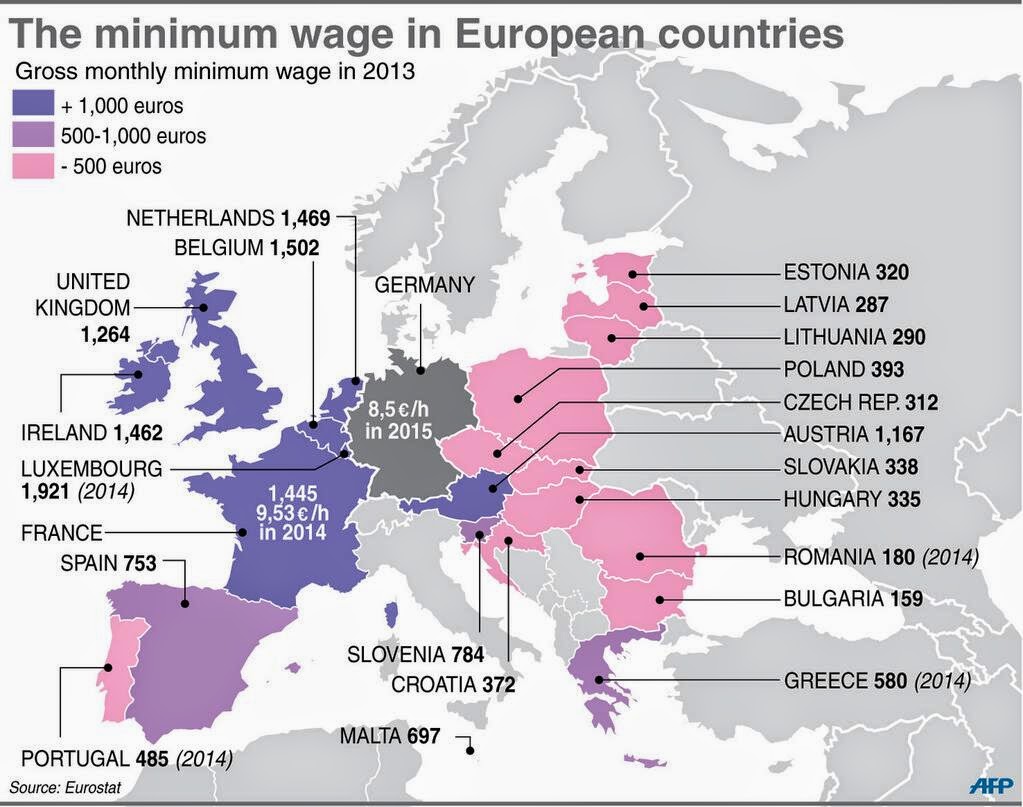 Utrecht city council to begin experiments with a basic income
Why Should We Support the Idea of Universal Basic Income?