Jozef Wesolowski, a former archbishop accused of child sex abuse, has been hospitalized hours before a trial against him was set to open at the Vatican. The unprecedented trial is likely to be adjourned to a later date.
Deutsche Welle, 11 July 2015 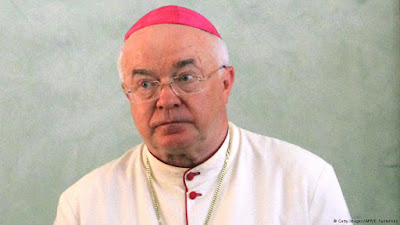 The 66-year-old former archbishop was placed in intensive care at a Vatican hospital, Holy See officials said Saturday, just hours before a trial against him was set to begin.

The details about Jozef Wesolowski's medical condition have not been disclosed.

The former Polish archbishop and papal ambassador to the Dominican Republic was set to stand a trial on Saturday for possessing child pornographic material in Rome during 2013-14 and sexually abusing minors during his stint as Vatican ambassador between 2008 and 2013.

Wesolowski was recalled to Rome in 2013 after local media accused him of paying young boys to perform sexual acts. He was defrocked by a Church court in June last year and was then put under house arrest on the orders of Pope Francis in September. Vatican inspectors found pornographic material on his computer following his arrest.

The Vatican has long been accused of not taking action against church officials allegedly involved in child molestation, but Pope Francis vowed to clean up the church after succeeding Pope Benedict in February, 2013.

Under a new justice system redesigned by the Argentine pontiff, the judge, the defense lawyer and prosecutors are all civilians.

"The (pornography) case is based on an offence introduced to Vatican legislation by Francis in 2013. The other involves sexual abuse of minors prosecuted on the case assembled by legal authorities of Santo Domingo," the Vatican said in a statement ahead of the trial.

"These serious allegations will be scrutinized by the competent judicial body, which will be assisted by both technical appraisals of the IT systems used by the defendant and, if necessary, international legal cooperation for the evaluation of testimonial evidence from the competent authorities in Santo Domingo," it added.

If convicted, Wesolowski could face up to six years in prison.