At a meeting in Germany, Qatar's emir has told Chancellor Angela Merkel his country does not provide financial support to Islamist militants. The leaders also discussed the Gulf state's human rights record. 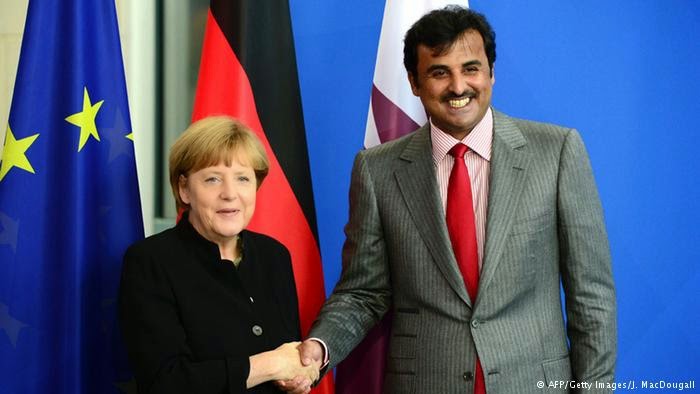 Sheikh Tamim bin Hamad Al Thani made the assurances on Wednesday during meetings with Chancellor Merkel and President Joachim Gauck in Berlin.

"What is happening in Iraq and Syria is extremism and such organizations are partly financed from abroad," the emir said at a news conference in the German capital.

Qatar has previously been accused of providing financial backing to extremist groups, including al Qaeda and Islamic State (IS) in Iraq and Syria. Qatar has also come under pressure from its neighbors in the region for supporting the Islamist Muslim Brotherhood in Egypt, the Palestinian Hamas, and Islamist groups in Libya.

Following Wednesday's meeting, Merkel told reporters the emir had reassured her "the fight against IS is as much the task of Qatar as it is of other countries." She added that she had "no reason" not to believe what the emir said. "There is a broad commonality that we can not accept this kind of intolerance and brutality."

The chancellor also pointed out that Qatar had also pledged its support to the US-launched alliance formed to combat IS fighters.

The terror group has made significant territorial gains in parts of Iraq and Syria in recent months, prompting US President Barack Obama to launch a new strategy - including airstrikes - to "degrade and destroy" the militants.

In her meeting with the emir, Merkel said she had also raised concerns about human rights and conditions for foreign workers in Qatar.

The country is preparing to host the FIFA World Cup in 2022, but has faced criticism after reports dozens of workers from India and Nepal had died on stadium construction sites. Some labor rights groups have argued for Qatar to be stripped of its hosting responsibilities.

"We do not say: We are the ideal state, which does not make mistakes," the emir said, and added that the government was working to address the problem.

Economic cooperation and investment were also on the agenda at the talks, with Merkel saying the resource-rich country was an important partner for the European Union, and that Germany had a lot to offer in the way of environmental technology and infrastructure.

"We are pleased about every Qatari investment," the chancellor said, praising the Gulf state's decision to buy shares in German companies, including Volkswagen, construction giant Hochtief, Siemens and Deutsche Bank.

At 34, the emir is the youngest head of state in the Arab world. He took over the position from his father, Hamad bin Khalifa Al Thani, who increased Qatar's economic output sevenfold during his reign from 1995 to 2013.