Pope Francis has attended an Istanbul church ceremony alongside Patriarch Bartholomew, the spiritual leader of the world's Orthodox Christians. In a symbolic show of deference, Francis asked for Bartholomew's blessing. 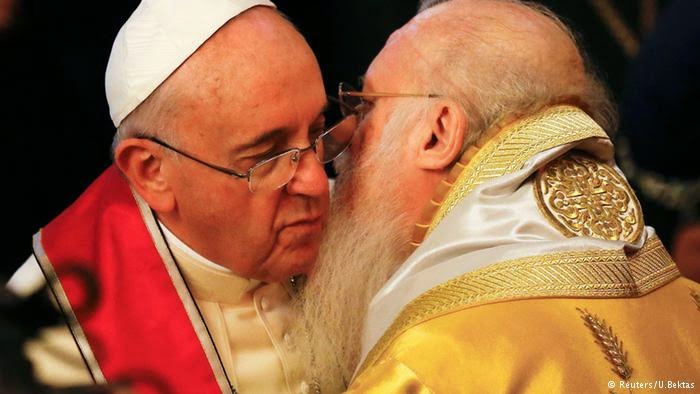 On his third and final day in Turkey, Pope Francis joined Ecumenical Patriarch Bartholomew at the Orthodox Church of St. George in Istanbul, a key meeting aimed at improving relations between the ancient western and eastern arms of Christianity.

The two religious leaders had also met several times on Saturday, when Bartholomew thanked the pontiff for his pursuit of the "fraternal and stable advance … for the restoration of full communion between our churches."

During a Saturday evening service, Francis had bowed to Bartholomew and asked for his blessing "for me and the Church of Rome." This step was considered symbolically significant, given that for many years patriarchs were expected to kiss the feet of popes. The Catholic and Orthodox churches split in 1054 over differences on the primacy of the papacy.

Francis was also scheduled to meet young Christian refugees from Syria and Iraq later on Sunday. Well over a million refugees are currently in Turkey, many of them after fleeing the self-styled "Islamic State," which has laid claim to territory in neighboring Iraq and Syria. The pope has repeatedly called for better treatment of refugees and migrants in the past. The Vatican confirmed shortly before his departure for Turkey that Francis would deliver a speech to the youths.

The 77-year-old Argentine, born Jorge Mario Bergoglio, began his three-day trip in the Turkish capital Ankara, meeting Islamist President Recep Tayyip Erdogan in his newly-inaugurated palace. On Saturday, his first day in Istanbul, he visited the Hagia Sophia and shared a "moment of silent adoration" with Grand Mufti Rahmi Yaran in the city's Blue Mosque.