At the end of a historic synod that endorsed a new direction for the Catholic Church, Pope Francis has called for the Church to be less judgemental and more compassionate. But Catholic clergy remain divided. 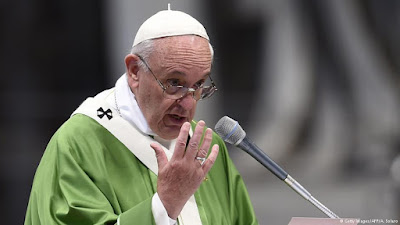 Pope Francis on Sunday stated that "Today is a time of mercy!" at a Mass in St. Peter's Basilica marking the end of a three-week divisive Vatican summit that reviewed the Catholic Church's teaching on the family.

In his homily, Francis said pastors were charged with bringing "people into contact with the compassionate mercy," and not with "lecturing" them on Church dogma, saying faith was not a mechanical exercise.

"A faith that does not know how to root itself in the life of people remains arid and creates other deserts, rather than oases," he says.

His words appeared to be a veiled warning to conservative bishops who at the synod opposed moves by the progressive wing of the Church to changing doctrine to allow divorced and civilly remarried Catholics to receive Communion.

Split in the Church

Although the 94-point document issued at the end of the synod did not explicitly allow such Catholics to receive the sacraments, as liberal prelates advocated, it does suggest that exceptions could be made on a case-by-case basis, emphasizing the role of discernment and individual conscience.
Even such a seemingly small change caused such division in the assembly of 275 synod "fathers" that the statement was endorsed by just one vote.

Although synods do not have the power to take decisions, the passage of the document will give Francis scope to elaborate his reformist views on family matters in a future official document.

German Cardinal Reinhard Marx, who headed a theological initiative that was instrumental in gaining a majority on the issue of divorce and remarriage, has suggested that such a document could be issued during his upcoming Jubilee Year of Mercy starting on December. 8.

The document however failed to make any changes to the Church's strongly disapproving stance on homosexuality.