Henriette Reker, victim of a racist attack on the campaign trail, is expected to be elected the first female mayor of Cologne. Intial vote counts gave Reker an overwhelming victory over rival Jochen Ott. 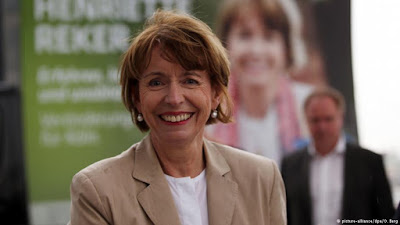 Early results on Sunday indicated that Henriette Reker, the victim of a knife attack the day before , has been elected mayor of Cologne. With an absolute majority predicted of around 52 percent, Reker was set to become the city's first woman in the position.

Her closest competitor was Jochen Ott of the Social Democrats (SPD), who have been in the power in Cologne since 2009. Ott garnered around 32 percent of the vote, marking a clear victory for Reker, an independent supported by Chancellor Angela Merkel's Christian Democrats (CDU), as well as the Greens and the Free Democrats (FDP).

Originally scheduled for September, the Cologne mayoral election was pushed to Sunday after some voting slips were printed incorrectly, which may be why the ballot was not postponed after the attack against Reker.

A 44-year-old man stabbed the 58-year-old Reker in the neck while she was visiting an outdoor market in Cologne's Braunsfeld neighborhood on Saturday. According to police, the man - an unemployed former painter and varnisher living on welfare – took issue with Reker's pro-refugee policies. Witnesses said he was shouting about refugees as he struck Reker.

As part of her work at the city of Cologne's social services department, Reker was charged with arranging accommodation for the thousands of asylum seekers in the city.

The assailant stabbed four more people before being subdued by police. No one was fatally wounded, but Reker was rushed to the hospital and immediately underwent surgery. A candlelit vigil to protest xenophobia was held in Berlin as well-wishers gathered outside Cologne's city hall to show support for Reker.

University Hospital Cologne told the press that "the healing process for this kind of injury usually takes a certain amount of time," but that Reker's prognosis was very positive.

A profile of Cologne's Henriette Reker, who was seriously wounded in the neck http://t.co/Zgc3fC10fG pic.twitter.com/L8zvaxwPvY
— Agence France-Presse (@AFP) 18 oktober 2015