A Euro-skeptic bloc within the European Parliament has collapsed. A Latvian member has pulled out of the group, breaching an EU rule that at least seven countries must be represented in a parliamentary faction. 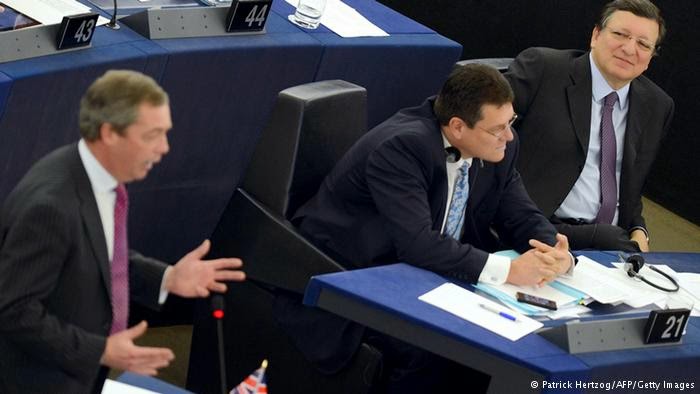 The euro-skeptic bloc formed after Europe's 28-nation election in May was dissolved on Thursday. Iveta Grigula of Latvia departed, depriving the other 47 parliamentarians of funding and roles in committees.

Half of the euro-skeptic contingent had been from Britain's UK Independence Party (UKIP) led by Nigel Farage, with 17 from the Italian anti-establishment 5-Star movement led by satirist Beppe Grillo.

Farage (pictured addressing parliament) and Grillo had headed the now defunct Europe of Freedom and Direct Democracy (EFDD). Grigule was the sole member representing Latvia's Union of Greens and Farmers.

The loss of faction status relegates the ex-EFDD parliamentarians to simply sitting alongside elected parliamentary members of France's far-right National Front and forced to periods allocated for parliamentary speeches, unable to draw on special parliamentary funds and having lost certain rights.

There was a celebratory response from the main center right European People's Party (EPP) faction in the parliament, which alternates its sittings between Brussels and Strasbourg.

"First defeat for euro-skeptics!," the EPP responded in a follow-on message.

Ahead of a by-election next month in the English town of Rochester, British Prime Minister David Cameron said on Thursday London should have "one last go" at trying to renegotiate Britain's EU membership.

Cameron's Conservative party is facing a neck and neck challenge in Rochester from a candidate of UKIP, Mark Reckless -- ahead of a decisive British parliamentary election in May.

Reckless is the second of two Conservatives in the British parliament to defect to UKIP since August.

In a by-election earlier this month in another area, Clacton, the other Conservative, Douglas Carswell, became UKIP's first elected member of the British parliament.