The traditional Easter marches against war and the arms trade are to end with rallies in Frankfurt, Hamburg and Nuremberg, among other towns. Eighty rallies have been organized in total. 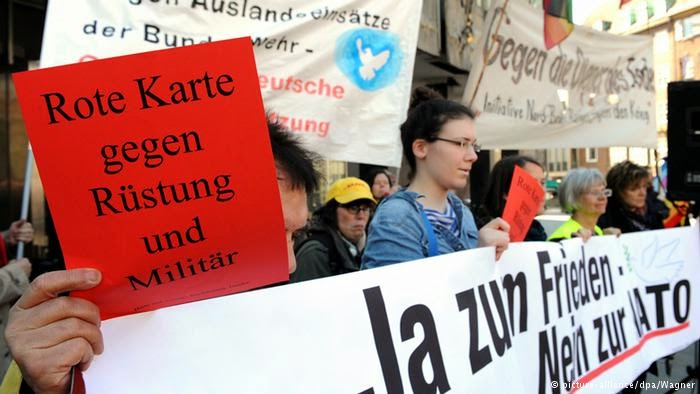 Thousands of people have taken part in rallies across Germany over the Easter weekend in the traditional anti-war demonstrations, which draw to a close on Monday.

The peaceactivists have organized events under the banner: "Never again fascism - never again war" against war propaganda and threats of war in Europe. Along with rallies in Frankfurt am Main, Hamburg and Nuremberg on Monday, there will be demonstrations in Offenbach, Darmstadt and again at the Büchel airfield, for the second time within a few days. A festival of peace is planned for Dortmund.

The participants are calling for an end to German armed forces missions abroad and a ban on new weapons such as combat drones. They are campaigning for an end to war, violence, arms trafficking and xenophobia and for the promotion of international understanding and a world without nuclear weapons.

In Bonn, police said around 130 people rallied under the slogan: "No to war - Refugees are welcome."

Germany's Easter marches began with a demonstration in Hamburg in 1960. They have their roots in protests against a nuclear weapons research facility in Britain in the 1950s.

The Easter marches reached their peak in support between 1968 and 1983, when events throughout West Germany brought hundreds of thousands out onto the streets annually to demonstrate against issues such as Washington's military involvement in Vietnam and the nuclear arms race.

Some 80 events were planned between Good Friday and Easter Monday this year, according to the Bonn-based Network of the German Peace Movement.