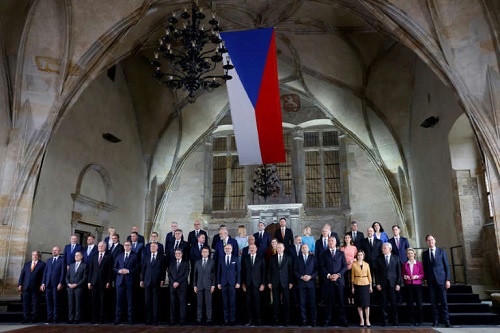 Given a rather unclear agenda, the family photo looked set to become a highlight of the meeting bringing together EU leaders alongside those of Armenia, Azerbaijan, Britain, Kosovo, Switzerland and Turkey © Ludovic MARIN

Hungary Says ‘Does Not Plan’ to Introduce Death Penalty

Budapest. Hungarian Prime Minister Viktor Orban “does not plan to introduce the death penalty,” his chief of staff Janos Lazar said Thursday, after strong EU criticism of Orban’s call for debate on its reintroduction.

Orban informed European Parliament president Martin Schulz by telephone that the government would debate the issue, but “the prime minister does not plan to introduce it in the country,” Lazar said.

Hungary will “keep to EU laws”, he added.

The statement came after European Commission chief Jean-Claude Juncker earlier warned Orban that he faced a “fight” if he reintroduced the death penalty.

“Mr. Orban should immediately make clear that this is not his intention and would it be his intention, it would be a fight,” Juncker told a press conference, stressing that the EU charter forbids the death penalty in the 28-nation bloc.

The controversy was sparked on Tuesday when Orban pushed for a debate on bringing back capital punishment, saying existing penalties in Hungary were too soft.

Orban’s comments immediately sparked a sharp response after a series of spats with Brussels over his hardline stance on human rights and civil society norms — key values for the European Union.

Hungary abolished capital punishment after the end of communism in 1990, fulfilling a key condition for membership of the European Union, which it joined in 2004.