Paris (AFP) - French lawmakers voted Tuesday in favour of recognising Palestine as a state, sparking an immediate angry reaction from Israel which said such "unilateral measures" would harm efforts towards Middle East peace.

Following hot on the heels of similar votes in Britain and Spain, French MPs voted 339 to 151 in favour of a motion urging the government to recognise the state of Palestine as a way of achieving a "definitive resolution of the conflict."

The vote -- which is non-binding on the government but highly symbolic -- comes as European countries seek alternative ways to restart the stalled Middle East process.

Sweden's government has gone even further, officially recognising Palestine as a state in a controversial move that prompted Israel to recall its ambassador.

But the French vote result still prompted a swift and angry response from Tel Aviv, which said it would send the "wrong message" to the region and would be counterproductive to the drive towards peace.

"Israel believes that the vote in the National Assembly... will reduce the possibility of achieving a deal between Israel and the Palestinians," its embassy in Paris said in a statement.

A solution to the conflict will be achieved "only with honest and direct talks between the parties and not by unilateral measures taken by one of the parties or by third parties," it said.

The Palestinian leadership, meanwhile, expressed its "gratitude" for the vote and urged Paris to "translate its parliament's vote into action".

France will 'do its duty'

Palestinians are seeking to achieve statehood in Gaza and the Israeli-occupied West Bank with east Jerusalem as the capital.

With little progress on reaching a settlement, they have been lobbying foreign powers for international recognition.

The Palestinian Authority estimates that 135 countries have now recognised Palestine as a state, although that number is disputed.

During a debate on the issue Friday, Foreign Minister Laurent Fabius said Paris would recognise Palestine if diplomatic efforts failed again and urged a resolution to the Middle East conflict within two years.

France is spearheading a drive at the United Nations to unfreeze the moribund peace process and the Palestinian envoy to the UN said earlier Tuesday a draft resolution could be submitted to the Security Council by mid-December.

Riyad Mansour told AFP the text was set to lay out a timeframe for negotiations on a final peace deal and possibly a deadline for Palestinian statehood.

It would also pave the way for a last-ditch international conference that France has offered to host.

This European initiative was expected to be discussed in Brussels when US Secretary of State John Kerry holds talks with European ministers during this week's NATO meeting.

"If these efforts fail. If this last attempt at a negotiated settlement does not work, then France will have to do its duty and recognise the state of Palestine without delay and we are ready to do that," Fabius told MPs on Friday.

At a pan-European level, the European Parliament is expected to hold a vote later this month on recognising Palestine and EU foreign policy supremo Federica Mogherini is also pushing for the creation of a Palestine state.

However, lawmakers in Paris were more divided on the issue than their British and Spanish counterparts, reflecting the sensitivity of the debate in France, which is home to Europe's largest Jewish and Muslim communities.

Senior lawmaker Christian Jacob of the opposition UMP party told MPs ahead of the vote: "Who are we kidding? We are kidding the French people if we think that the parliament will have any influence at all" on the peace process.

France was the scene of several pro-Palestinian demonstrations during this summer's 50-day offensive by the Israeli army in Gaza that killed more than 2,000 Palestinians and dozens of Israelis.


Some of these turned violent with looters in July destroying Jewish businesses and shouting anti-Israel obscenities in the Paris suburb of Sarcelles -- sometimes known as "Little Jerusalem" for its large community of Sephardic Jews.

Recognizing Palestine 'helps peace above all'
Jerusalem should be capital of two states: top EU diplomat 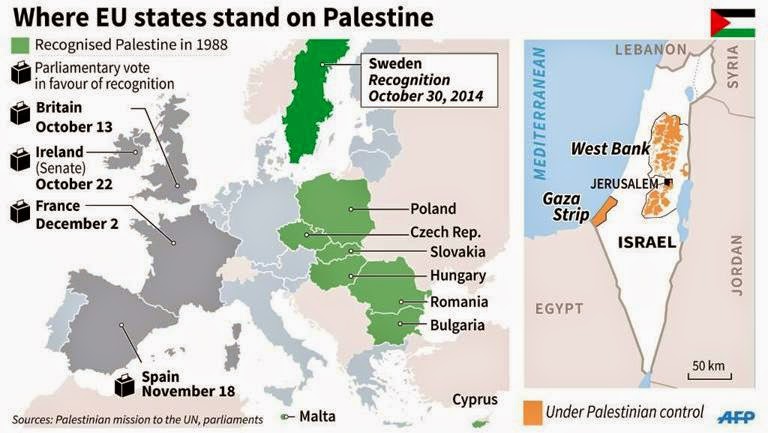