Poland's Donald Tusk has taken over as European Council president, charged with convening summits of the bloc's 28 leaders. The former Polish premier has promised "ruthless determination" to fix Europe's economy. 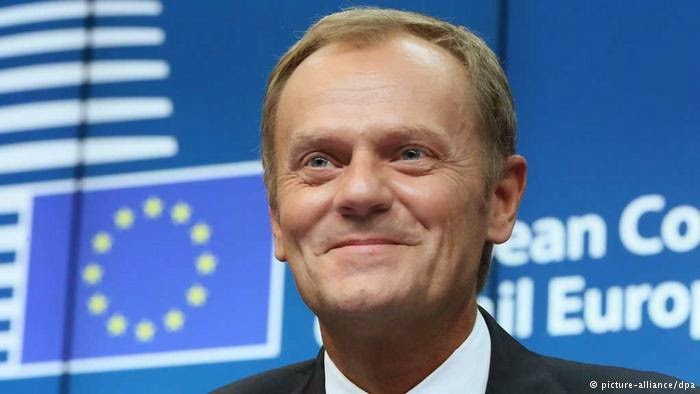 Tusk, a centrist, was handed a summit bell by Belgium's Herman Van Rompuy on Monday, becoming the first person from the former East bloc to head the European Council.

As council president, Tusk completes the EU's new trio - alongside Luxembourg's Jean Claude Juncker, who is chief of the European Commission, and the foreign affairs coordinator, Federica Mogherini of Italy.

Van Rompuy described Tusk as the "favorite son of Poland" with an "open heart," adding that he was now at the helm of the EU's "most important institution."

Tusk, who studied history and follows football keenly, began his political career in the 1980s as part of Poland's Solidarity union movement, whose protests contributed to the collapse of Soviet-style communism.

He was twice elected prime minister in Poland's post-communist era. He led Poland's center-right Civic Platform from 2001 for 13 years.

At a handover ceremony in Brussels, Tusk said he would focus on protecting Europe's fundamental values from threats "coming from outside and inside."

"Today not only are euroskeptics questioning the EU's values, we have also enemies," he said, referring to anti-EU parties and presumably Russia,although he did not elaborate.

"Relations between Europe and the United States are the backbone of the community of democracies," he said, adding that Europe had to support those neighbors "who share our values."

"The year ahead will be crucial," he added.

The 57-year-old vowed to help rescue Europe's economy from near deflation and high unemployment in member nations such as Spain.

"We need ruthless determination to end the economic crisis," he said.

He also called for the completion of the European monetary union. Poland does not yet use the euro single currency.

When still Polish premier, Tusk promoted Poland's integration into the EU, unlike his predecessor Jaroslaw Kaczynski.

Relations with Germany, once wrought by World War II, have also warmed. Tusk and Chancellor Angela Merkel are said to have a good working relationship.

Since being picked as prospective council president by EU leaders in August, Tusk has been brushing up his English - a skill needed to reach summit consensus.