Turkey and Iraq have pledged to work towards greater military cooperation in the fight against "Islamic State" militants. The ultra-radical Sunni fighters control large swathes of territory in northern Iraq and Syria. 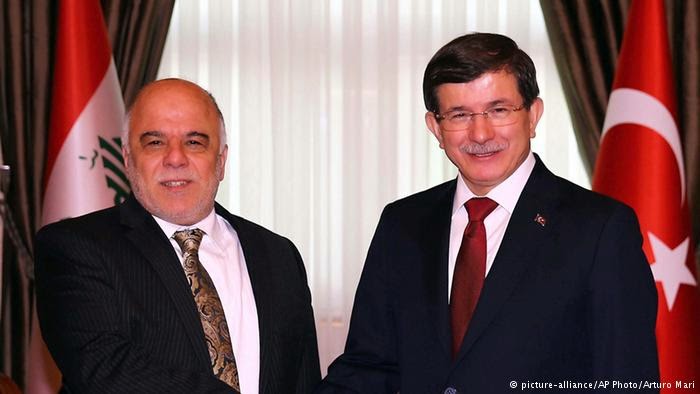 Iraqi Prime Minister Haider al-Abadi told reporters at a joint press conference with his Turkish counterpart Ahmet Davutoglu in Ankara on Thursday that he had presented a "list" of requests for specific types of support in the fight against "Islamic State" militants.

Abadi described the IS as a "threat to the whole region."

Therefore, there is a need for cooperation. That's what we expect of Turkey," al-Abadi said. "Whether it is military, intelligence sharing, training or even arms - these were talked about," he added.

He also indicated that Turkey may be prepared to provide arms to forces loyal to the Iraqi government.

"There are preparations being made with the assistance of the Turkish side in providing us with weapons," Abadi said.

For his part, Davutoglu alluded to the fact that the Turkish military was already playing a role in the fight against the IS in Iraq, since it began training peshmerga forces last month. He also said the training could be extended to Iraq's National Guard.

"Our defense ministers will carry out a more detailed study on this issue. We already have provided support in terms of military training. We are ready to give whatever further assistance we can in these areas," Davutoglu said.

"We are ready to give any kind of support against terrorist organizations," he added, mentioning not just IS, but the Kurdistan Workers Party, (PKK), which from 1984 to 2013 fought an armed campaign against the Turkish state.

In late October, Turkey also allowed around 150 Kurdish Peshmerga fighters from Iraq to cross into Syria from its territory.

Although it is a member of the Western military alliance NATO, Turkey, which shares a 1,200-kilometer (756 mile) border with Syria, has declined to play a direct role in the US-led coalition, which has been conducting an air campaign against IS militants in both Syria and northern Iraq.