Spain's King Felipe VI has used his first Christmas speech as monarch to condemn corruption in his country. He made no reference to his sister, who faces jail on fraud charges. 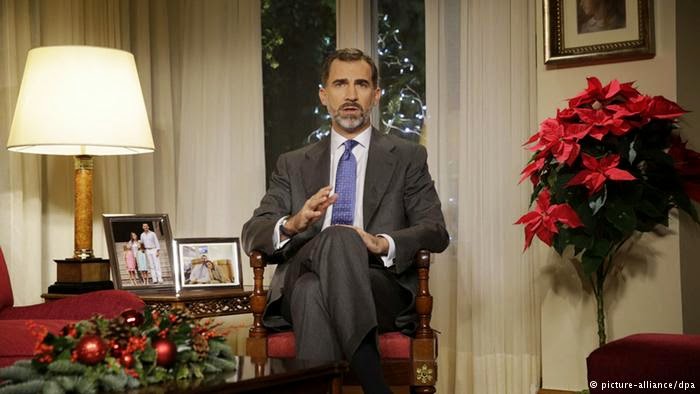 In his first Christmas Eve address since being crowned in June, Felipe said corruption must be stamped out, and angered voters should take heart that high-level figures accused of "irregular conduct" are being held legally accountable.

Felipe's speech is seen as particularly singling out his sister, Cristina de Borbon, although it made direct reference neither to her nor the charges she faces. Cristina, the first Spanish royal to face prosecution since the restoration of the country's monarchy in 1975, was indicted two days ago on two counts of tax fraud.

"There must not be favored treatment for those occupying a position of public responsibiltiy," Felipe said. "Public office must not be a means to profit or becoming rich."

"Few subjects arouse such a unanimous opinion. We mustn't hesitate to cut corruption at its roots."

The case against Cristina and her husband, Inaki Urdangarin, as well as several other instances of high-profile corruption have come during a major economic crisis in Spain and a government austerity drive.

Cristina faces eight years in prison if convicted over an alleged scheme operated by her husband's non-profit organization, which allegedly embezzled public funds and syphoned them into another private company owned by the couple.

Felipe also addressed Spain's economic woes, saying it was "unacceptable" the country had a jobless rate of 24 percent. He said younger Spaniards were becoming disillusioned with their job prospects.

He also attempted to reduce secessionist sentiment in the northeastern region of Catalonia.
"Millions of Spaniards have Catalonia in their hearts," Felipe said.

He ended his televised address by wishing viewers a Merry Christmas in four languages - Spanish, Basque, Catalan and Galician.