Defense Ministry official sought to quell reporting about the G36

Germany's defense minister has said an official in her ministry tried to get an intelligence service to cover up negative reports about an assault rifle used by the Bundeswehr. The official has been removed from his job 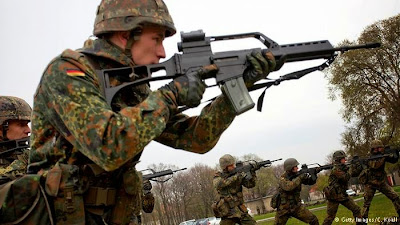 German Defense Minister Ursula von der Leyen on Thursday confirmed in part an article published by "Spiegel Online," which reported that a senior ministry official had written a letter to the military intelligence service MAD, asking it to try to find the source of leaks about the G36 assault rifle.

According to the report, the official wrote the letter on the urging of the manufacturer of the G36, Heckler & Koch, which feared media reports on the assault rifle's shortcomings could damage its reputation. "Spiegel Online" cited a secret ministry file detailing how the company and the official suggested that the MAD could stop negative media reports about the G36, which has been the Bundeswehr's main assault rifle.

It said the idea was for MAD to find the sources of leaks about the G36 while at the same time spying on the journalists behind the critical reports. It described articles published not just by "Spiegel Online, but also by the "taz" newspaper and the weekly "Die Zeit," beginning in 2012 as an "untrue media campaign."

However, the MAD, which among other things is responsible for counterintelligence and detection of "anti-constitutional activities" within the Bundeswehr, turned down the Defense Ministry official's request, dismissing it as "absurd."

Von der Leyen said she found it "very strange" that Heckler & Koch had approached the ministry about the issue and that it was "completely unacceptable" that the civil servant supported the initiative. She said while the official in question had been removed from his post, the fact that that things got as far as they did needed to be "further cleared up."
According to "Spiegel Online," though, the civil servant in question was not fired but merely transferred to another job.

Call for a parliamentary inquiry

Van der Leyen's explanation did not satisfy the opposition though, with the Greens on Thursday demanding parliamentary inquiry be set up to investigate the matter. Agnieska Brugger, a member of the Bundestag's standing committee on defense, said von der Leyen's statement amounted "not to an apology but a poor excuse."

The parliamentary leader of the Left party, Gregor Gysi said he also favored a Bundestag inquiry, but only if a time limit was agreed. Gysi argued that it made "no sense now to spend a year or even longer talking about an old weapon."

Together, the two opposition parties have enough votes to force an inquiry.
The minister did not appear to be overly worried about the prospect.

"If parliament wants to examine this issue in the framework of a committee of inquiry, that is its legitimate right," she said.

Von der Leyen had announced last month that she had ordered that some 170,000 G36 rifles issued to the Bundeswehr be replaced. This came after a study showed that it had a "precision problem, particularly at high temperatures."