After Ireland's citizens voted overwhelmingly in favor of marriage equality in a historic referendum, members of Germany's Green party have called for the recognition of same-sex marriage in Germany as well. 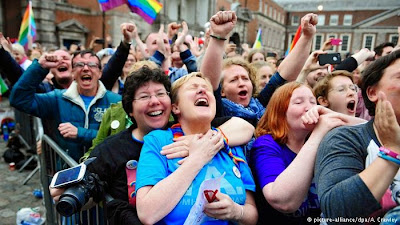 The Greens on Sunday appealed to German Chancellor Angela Merkel to allow same-sex marriage in Germany.

"It's time Mrs. Merkel," the party's parliamentary leader Katrin Göring-Eckardt told newspaper "Die Welt." "The Merkel faction cannot just sit out the debate on marriage for all…I am confident that the Irish vote will accelerate equality in Germany."

In a historic referendum held on Friday, Ireland voted by a landslide in favor of changing the constitution to recognize marriage between same-sex couples. It marks a significant step in a predominantly Catholic country where homosexuality was a criminal offense until 1993.

Same-sex civil partnerships have been legal in Ireland since 2010. Similar recognition was introduced almost a decade earlier in Germany with the Civil Partnership Act in 2001, but in the meantime, Göring-Eckardt said "even Ireland has overtaken us." The German
partnerships, however, do not provide couples with exactly the same tax and adoption rights as marriage.

Celebrations continued into Sunday morning in Dublin after the official results of the referendum were announced. Following the vote, Ireland is set to become the 19th country in the world to allow gay marriage, as well as the first to do so by referendum.

More than 62 percent of the 3.2 million votes backed the change, while 37.9 percent opposed it. Only one of Ireland's 43 constituencies, Roscommon-South Leitrim, recorded a narrow "no" majority.

"The Irish people have made it clear: the oppression of gays and lesbians is not a Christian value," he said.